Michigan’s Department of Licensing and Regulatory Affairs officially added eleven new conditions to the list of debilitating medical conditions that qualify for medical marijuana treatment in Michigan.  These new additions come nearly a decade after the Michigan Medical Marihuana Act was enacted. This announcement reiterates the state’s commitment to its Medical Marihuana program, which could be put in flux by the recreational legalization ballot measure this fall.

While the process for obtaining an MMMP card, or medical marijuana patient card, remains unchanged, it likely just got a lot easier for potential patients to qualify for the program.  In order for a patient to obtain a medical marihuana registry identification card, the patient must have written certification by a physician that outlines three things: (1) the patient’s debilitating conditions, (2) a full assessment by the physician of the patient’s medical history, current medical condition, in-person medical evaluation, and (3) the physician’s professional opinion concluding that the patient is likely to benefit from medical marijuana. Only patients with qualifying debilitating conditions are able to obtain a registry identification card.

One item that patients may be familiar with is chronic pain. Previously, the MMMA listed “severe and chronic pain” as a qualifying debilitating condition.  Patients now only only to demonstrate chronic pain, as opposed to severe and chronic pain, in order to qualify. This change opens up the MMMA program to patients that might otherwise be unable to demonstrate that their pain was sufficiently severe and could provide additional treatment options for patients who might otherwise be prescribed opoiod treatments.  With some studies suggesting the availability of medical marijuana significantly decreases the number of such overdoses, marijuana could start replacing some prescription pain treatments. 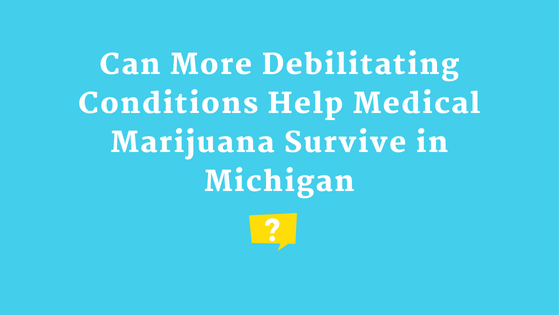 Although LARA did approve eleven conditions, several conditions didn’t make the cut, including several mental disorders such as anxiety, depression, panic attacks and social anxiety disorder.  Another significant condition that did not make the cut was non-severe and non-chronic pain. If this condition was approved, medical marijuana would be able to be used for short-term pain management.

This list contains several very commonly known diseases. A third of Michigan residents have Arthritis. Over 50,000 Michigan residents suffer from Inflammatory Bowel Disease and another 50,000 are living with Autism. This expansion means that medical fast becoming a medically accepted treatment for several serious conditions, pushing it to the mainstream of medicine and giving patients suffering from these diseases more options for treatment.

Michigan’s Medical Marijuana program does have a few key features that will help differentiate it from the RMLA MiLegalize ballot proposal. The first feature is that those 18 and older but under the age of 21 would have access to the medical market but not the recreational market. The second feature is that the excise tax for medical marijuana is only 3%, which is much smaller than the 10% tax applicable to recreational marijuana.

A third and perhaps the most significant feature is that the actual cost of products may end up being less for marijuana produced under the MMFLA compared to marijuana produced under the RMLA / MiLegalize ballot initiative, at least in the short term. The reasons for this are several fold. First, the medical marijuana market will be pretty close to fully developed by the time recreational marijuana facilities start applying for licenses. With several mega-facilities planned, and the number of patients relatively smaller, at least compared to the recreational market, there will be much more supply and much less demand, meaning a much cheaper price.

Moreover, the grower license types for recreational marijuana could be subject to different regulations compared to the MMFLA. LARA allowed multiple, “stacked” Class C grow licenses under the MMFLA, which almost certainly will contribute to a lower overall wholesale price for medical marijuana.  The RMLA ballot language is silent on this issue, which means that the decision of whether to allow stacked Class C recreational licenses is within the hands of LARA. Depending on who is in charge, LARA may attempt to undermine the recreational market to the extent it is able to (I’m looking at you Bill Schuette), and that would be one way to do it.