This article was published several months before the MMFLA Emergency Rules were released.

It is now clear that not only may local police shut down dispensaries that are not compliant with the MMFLA, but the Michigan State Police will also start enforcing the MMMA with respect to dispensaries. This meaning dispensaries must seek to license under the MMFLA or they will be shut down by the Michigan State Police.  If you need help in this changing provision landscape, contact us today to schedule a consultation with dispensary attorney to assist with your Part 1 or Part 2 MMFLA application or continuing compliance obligations.

The answer to our question is maybe. The Michigan Marihuana Facilities Licensing Act, Public Act 281 of 2016 (“MMFLA”) creates a category for dispensaries called “provisioning centers”, which under the law is a licensed entity that purchases marijuana from a grower or processor and sells it to a patient or caregiver. Dispensaries, on the other hand, currently operate under the Michigan Medical Marihuana Act, Initiated Law 1 of 2008 (“MMMA”). While the MMFLA did modify the MMMA in certain respects, it did not replace it.

Transfers from legal caregivers to their patients are still protected under the MMMA. Thus, a dispensary could technically operate under the MMMA and not obtain a provisioning center license. However, a provisioning center can legally sell to any Michigan patient or any Michigan caregiver, whereas caregiver centers can only legally sell to their own patients (even though many choose to ignore this restriction). 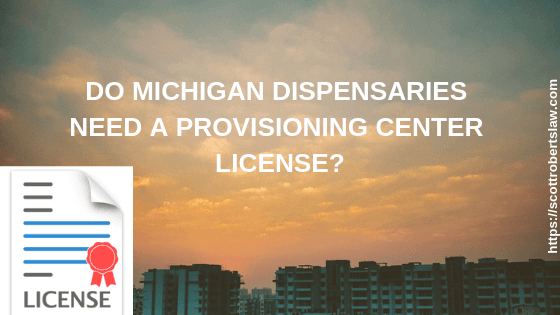 The main problem with this is that Michigan courts have found dispensaries to be illegal under the MMMA. In the State of Michigan v. Brandon McQueen and Matthew Taylor, d/b/a Compassionate Apothecary, LLC, the Michigan Supreme Court ruled that the MMMA does not authorize or permit marijuana dispensaries and that dispensaries can be shut down under state nuisance laws. The court also found that the MMMA only offers immunity to transfers from a registered caregiver to the caregiver’s registered qualifying patient as listed in the state registry and does not offer immunity for transfers to anyone else.

Despite this decision, dispensaries operating under the MMMA are flourishing in cities and counties that have chosen to allow them. Several cities—most notably Detroit and Ann Arbor—have chosen to ignore the court ruling. However, this could no longer be the case for these cities. City officials and county prosecutors could decide that given the new legal framework, the rationale for looking the other way—that the dispensaries provide a service to patients—is no longer the case with the MMFLA allowing dispensaries licensed as provisioning centers.

There is also the possibility that LARA will address this issue in its upcoming MMFLA regulations due to come in early fall 2017, or in later regulations.

In short, while dispensaries may be able to operate as caregiver centers, for the time being, doing so is fraught with risk. In contrast, the MMFLA provides explicit legal protections from prosecution for provisioning centers with a valid license.  It is therefore recommended that dispensary owners obtain an MMFLA provisioning center license.

Need help establishing your business as a Licensed Provisioning Center?  Schedule a consultation with our MI Cannabis Attorneys at (248) 234-4060!