Due to legal and regulatory changes in the industry, including the 2018 Farm Bill and recent changes in the implementation of Michigan’s 2014 Industrial Hemp Research Act, the information contained in this Article may no longer be accurate. Please contact an attorney before relying on any information contained in this Article. For more information on cultivating hemp, or the Hemp Pilot Program in Michigan, check out our recent article.

The Hemp and CBD industries hit a setback last week with a decision from the federal court of appeals that sided with the Drug Enforcement Administration and affirmed the decision that cannabidiol (CBD) is a Schedule 1 controlled substance under the Controlled Substances Act. While the decision represented a major setback for the American hemp and CBD industries, it would not stop Michigan from legalizing commercial hemp under the RMLA. Prior to 2016, CBD was considered to be legal, or at the very in a legal grey area, as it wasn’t listed in the Controlled Substances Act, unlike marijuana or THC. This changed in 2016 when the DEA issued a “clarifying rule” that classified CBD as an illegal drug because it is made from extracting marijuana flowers.

The hemp industry filed suit challenging the rule, arguing that CBD can also be extracted from legal hemp flowers, and there is no way to tell whether extracted CBD came from marijuana flowers or from hemp flowers. As such, the Hemp Industries Association argued that the DEA was trying to add a new substance to the Controlled Substances Act – something that they cannot do without the federal legislature revising the Act. In response, the DEA argued that the CBD extract rule was simply a clarification of existing law and that it “makes no substantive change to the government’s control of any substance.” 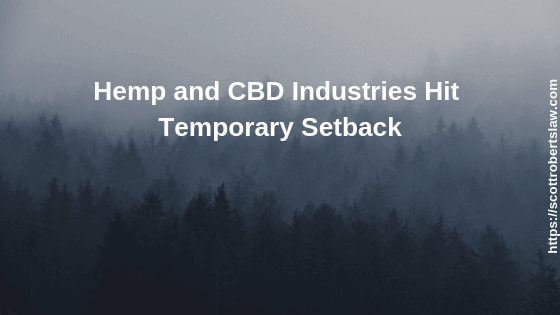 The DEA also ridiculed the hemp industry’s position that CBD is being made from anything but flowering parts of the cannabis plant because cannabinoids “are found in the parts of the cannabis plant that fall within the … definition of marijuana, such as the flowering tops, resin, and leaves.” The three-judge panel of the 9th Circuit agreed. Their decision means that the DEA was within its authority to clarify CBD as a “marijuana extract.”

So what does this mean for the Michigan Hemp Industry? As Michigan has legalized medical marijuana, the sale of CBD is authorized under state law for those with medical marijuana cards.  However, CBD sales to individuals without a medical marijuana card would now be considered illegal under federal law, though it is unclear whether Michigan will actually take steps to enforce this decision.  As Michigan prepares to vote on the legalization of recreational marijuana in November 2018 with the Regulate Marijuana Like Alcohol (RMLA) initiative, commercial hemp production, which is used to make low-cost CBD, could be legalized as soon as 2018 under state law, along with recreational use of CBD.

In regards to federal law changes, Senate Majority Leader Mitch McConnell has proposed a bill to take hemp out of the Controlled Substances Act and classify it as an agricultural commodity, similar to corn or wheat.  This proposal would give the hemp industry authority to make CBD from hemp, instead of forcing states to make individual decisions.  McConnell has since said that provisions in his bill will likely be included in the next Farm Bill, due later this year.

If you are considering commercial hemp production or CBD extraction in Michigan and are in need of a Hemp Lawyer or Hemp Attorney, you should consult with an experienced business attorney familiar with issues surrounding the Controlled Substances Act. The boutique business firm of Scott Roberts Law provides free consultations to Michigan Hemp, CBD, and Marijuana businesses.

Need to know more about how to keep your Hemp or CBD business legal? Give us a call at (248) 234-4060 and schedule a consultation today!