So you’re thinking about entering the commercial cannabis industry, either in a medical marijuana state or a recreational marijuana state. Maybe you go to a few cannabis business conferences like MJBizCon or CannaCon and notice that the people who have been in the industry for a while tend to speak a little differently than those who are just entering.  Or maybe you have already entered the industry and want to sound like you are a grizzled industry veteran. In either case, you need to learn the cannabis industry lingo.

Like nearly all industries, the commercial cannabis business has its own lingo and way of speaking. If you talk to a cannabis industry veteran, you may notice they almost never say “weed”, “tree”, “ganja”, “reefer”, or any number of slang terms for marijuana.  They will almost always refer to it as marijuana or cannabis. In general, cannabis industry professionals generally avoid using all of the street slang that has developed over the years, instead using more scientific or technical terms for marijuana and cannabis. For instance, despite the fact that there are lots of searches for “420 lawyers” or “420 attorneys”, I’ve never heard anyone in the industry ever use either term. The same goes for terms like “blunts”, “spliffs” or similar terms. My entirely unofficial general rule is this—if a 19 year old stoner would say it among their friends, a cannabis business professional probably wouldn’t.

Depending on how long you have been “familiar” with marijuana and marijuana lingo, these habits can be hard to break. If you’ve been “familiar” with these terms for decades, it can take months if not years to finally break old bad habits and have industry lingo naturally roll off your tongue. I occasionally still find myself using slang terms when talking to clients or other industry professionals, but I’m slowly breaking the habit. 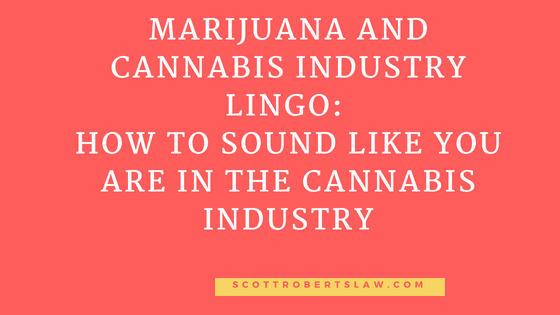 One term that is almost constant throughout the industry and which I’ve had a hard time getting myself to use, at least use in any sort of natural way, is cannabis.  If you look at my previous articles , I use the term marijuana way more than I use the term Cannabis when referring to the cannabis business.  Yet, if you are talking to industry professionals, they generally use the term “cannabis industry” as opposed to “marijuana industry.” Calling it the “cannabis industry”, calling yourself a “cannabis business,” or calling me “cannabis attorney” is seen as slightly more professional than saying you are a “marijuana attorney.” I’m trying to start using the term cannabis more, as you can probably tell from this article. I’ve also talked to people who disagree and think that marijuana and cannabis are interchangeable. But in my experience, cannabis tends to be used much more in the commercial and business context, whereas marijuana is used more in the criminal or colloquial context.

Why does cannabis seem to be implicitly favored among commercial cannabis businesses? My guess is that it’s because it comes from the technical, scientific term—i.e. Cannabis Sativa. The longer someone has been in the cannabis industry, the more they use technical and scientific terms as opposed to slang or other terms. Another example of this is the word “trichomes”, which I had personally never heard of before entering the cannabis business.  For whatever reason, those who have been in the industry for a while don’t talk about “crystals.” Instead, they talk about “trichomes”—unless of course they are dealing directly with the consumer, in which case its back to crystals or kief.

When talking about “dabs”, oils, “wax”, “shatter” and the like, these are generally referred to as “concentrates” and the methods for making them “extraction.” You’re not going to find many cannabis industry professionals talking about “dabs” or “shatter” unless they work in a dispensary and are talking to a customer or have been making them well before doing so was strictly legal.

While industry professionals don’t generally use street slang, we do have our own slang that sometimes confuses outsides. When writing emails, or even sometimes when talking over the phone, I will call the medical marijuana industry “MMJ” for short. I’m definitely not the only cannabis professional to do this. I don’t even really know where I picked this up from but have found myself using it more and more in emails and texts to clients.

Finally, let’s talk about marihuana v. marijuana, since that seems to be a common question I’ve heard on a number of occasions among people first entering the cannabis business. Here in Michigan, all cannabis statutes and regulations talk about “marihuana” or “medical marihuana”—they do not use the commonly accepted spelling of marijuana. However, I’ve never actually seen anyone use “marihuana” outside of referring to statutes and regulations that use it, with the exception of one or two companies that use it for marketing to try to be clever. In the end, this term is not used outside of the context of referring to Michigan marijuana statutes and regulations, and its pronounced the same anyways.