The Bureau of Medical Marihuana Regulation Licensing Board (BMMR) met on July 12, 2018 to discuss the prequalification applications of 19 commercial medical marijuana applicants. During the meeting the, the Licensing Board also issued the first MMFLA commercial licenses and reviewed the overall status of medical marijuana business applications received by the Department of Licensing and Regulatory Affairs (LARA). In attendance were all 5 Board members, as well as LARA Director Brisbo and a LARA staff attorney.  The July meeting follows last month’s scheduled meeting that was cancelled due to undisclosed board member scheduling conflicts. As a result, the Licensing Board reviewed more applications than in previous board meetings.

The Board approved pre-qualification status for 15 out of 19 Michigan Medical Marihuana Facility Licensing applications in the first portion of this session, including several unanimous approvals without any comment or discussion. This represented an overall increase from May’s 63% approval rate, 76% of the applications received were approval at July’s meeting.  As has been the case, the Board did not state which type of MMFLA license each applicant was seeking in most cases. In addition to the 15 “Part 1” approval, 4 out of 6 applicants were awarded commercial medical marijuana licenses at the second portion of the meeting, with two applicants being denied or tabled for future deliberations.

Throughout the discussions, several board members went back and forth with each other on whether to consider certain information provided by State Police and LARA’s investigation and what conclusions they would be permitted to draw based on those investigations.

It appeared that certain members of the Board were focusing on examining only the materials provided to them and not speculating as to “what if” and what “may happen in the future”. In contrast, one member in particular—Donald Bailey—openly discussed all of the “what if” scenarios and assumptions that could be drawn from the facts.

Mr. Bailey took issue with one dispensary’s website, which included language about “medical and recreational” marijuana even though the dispensary only accepted medical card holders.  He also speculated that participation at a Cannabis Cup event—which was only open to medical marijuana card holders—was participating in the “recreational market”. While Mr. Bailey and Board Chair Rick Johnson voted against this applicant, the company was nonetheless pre-approved on a 3-2 vote. 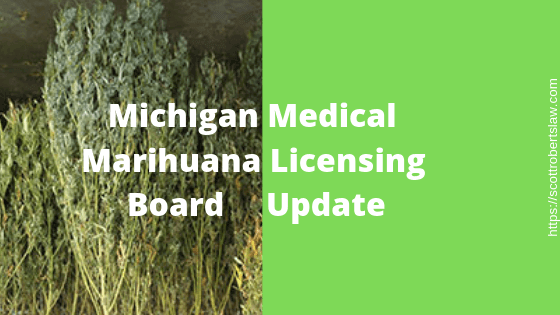 On a few occasions, other board members sought to reign in Mr. Bailey, warning that the decisions needed to be based on the facts in front of them and not “what if” scenarios that may or may not come to pass.  Pushing back against such warnings, Mr. Bailey stated he had special information from state police not contained in the packet and pushed back against other members warnings to stick to the application. He stated he was put on the board to use his experience in law enforcement.

What Mr. Bailey didn’t seem to grasp was that the other members were seeking to protect him, and the licensing board in general, from future court challenges and appeals.

While there was disagreement among members on a couple issues, there was one message all board members could agree on, and was harped on throughout the meeting: it is better to over-disclose than to under-disclose. To illustrate this, the Board briefly appeared to consider an unreported traffic violation as a “failure to disclose” violation at one point before being reigned in by the LARA staff attorney, who noted that the violation was not required to be reported and therefore could not form the basis for a “failure to disclose” denial.

What Can We Learn From the Denials: Disclosure and Integrity Issues

Similar to the last couple meetings, there were multiple applications denied for non-disclosure issues (predominately relating to criminal history).  This meeting also saw use of the provision regarding the applicant’s integrity, moral character and reputation to deny applications. This provision was basically used as a catch-all reason for denial by the board whenever there was criminal, tax or other “integrity” issues.  Below are some highlights from the meeting.

Turning to the board’s decisions, one applicant was denied for both failure to disclose and character and integrity issues.  The Board took issue with the fact that the applicant failed to disclose a number of traffic-related misdemeanors, such as open intoxicants and open alcohol in a vehicle.  When LARA inquired as to this incident, the applicant said she thought it was traffic related and did not believe that they were misdemeanors, therefore she did not disclose them.

Board Member David LaMontaigne stated that even if an applicant doesn’t think it is necessary to disclose certain issues, they consider it a “red flag” if you fail to report any criminal incident.  This same applicant showed significant electric bills for large grow operations, as well as large cash deposits that they claim are not related to marijuana.

Another applicant claimed income that put him under the poverty line, but asserted that he invested $20,000.00 into this business venture, which made the Board question the applicant’s integrity.

In reviewing one application, the Board noted that one of the applicants was a caregiver who in the last 3 years has acted as consultant for other caregivers.  From this business practice, his financial records show income in the amount of approximately $1.5M in last 3 years, $90,000.00 of which is from 2018. Board Member Donald Bailey thought that this was wildly beyond scope of MMMA, which he stated was not designed to make a significant profit for any caregiver. He did not give any rationale as to how such consulting activities actually violated the MMMA, instead appearing to rely on his previously stated position that the MMMA prohibits caregivers from making money off caregiver. In past meetings, LARA’s staff attorney had pushed back against his position that the MMMA absolutely prohibited caregivers from making money.

The Board also took issue with the fact that the applicant’s reported income was almost $100,000.00 less than the deposits into his bank accounts, which indicated possible tax evasion. There was no discussion on the possibility of any legal reasons for this discrepancy—e.g. sub-contractor or other business expenses—so we are left to wonder whether this was real or simply imagined tax evasion. Nonetheless, the Board’s position was that this applicant’s integrity was questionable based on how they performed business under the MMMA, since non-compliance with the MMMA would suggest a strong possibility of non-compliance with the MMFLA.

In reviewing whether to award prequalification status and a license to one entity, the Board stated that they had issues with the currently operating provisioning center hosting a doctor who performs medical exams at the facility, in violation of the MMFLA.  Board Member Donald Bailey noted that the applicant’s website shows advertising for “medicinal and recreational cannabis”. The Board was concerned that by promoting recreational cannabis, which is not allowed under the current law, that the applicant would not follow the MMFLA regulations once licensed.

One of the applications had a notable discussion regarding a supplemental applicant’s failure to disclose a possession of marijuana charge (which was dismissed without conviction) from 1969.   Despite the fact that this incident occurred over 48 years ago, the statute clearly states that an individual must disclose ANY arrest, charge, indictment, and conviction, regardless of whether it was dismissed or expunged. The Board did recognize the length of time that had passed since the charge, and noted that the statute only gives a basis for denial if the Board finds the omission to be intentional.  Based on these facts, the Board did approve the application, but cautioned applicants to be stringent in the review of their supplemental applicant/s criminal background checks.

The Board also noted that they have received a number of CPA attested statements that were “questionable”, and reiterated that it is important that CPAs review all financial records carefully and do their due diligence before attesting to an applicant’s financial condition. They indicated that they wanted more comprehensive CPA attested financial statements.

LARA also stated that when an applicant is going through their pre-licensure inspection, they suggest that the applicant schedule their inspection for a time when the applicant feels prepared.  Previous LARA inspections were mostly unannounced. LARA had stated that they had experienced issues with timing and overall delay in processing the applications because some businesses needed several inspections before they received approval. To remedy this situation, LARA suggested that providing notice to the dispensary may help speed up the inspection process by giving provisioning centers time to prepare and fix any issues before LARA inspectors become involved.  Just a few days after the meeting, we received multiple emails from LARA asking whether our facilities were ready for inspection.

With nearly 600 medical marijuana facility prequalification applications pending with LARA, the BMMR’s hard line approach on addressing failure to disclose issues, and their detailed analysis of financial records and inspection of the integrity of the applications, it is clear that the marijuana business licensing process is slow and gritty. We have emphasized this before, but it is absolutely imperative that your MMFLA commercial marijuana application be accurate, complete and forthcoming.

If you have questions or concerns regarding the MMFLA licensing process for your Michigan medical marijuana business, we recommend you contact a Michigan marijuana business attorney today to discuss the specifics of your situation and how to ensure your application moves smoothly through this difficult process.