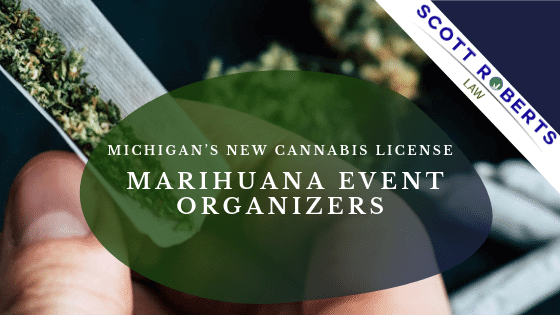 The Marijuana Regulatory Agency recently put out new rules that will initially govern Michigan’s “adult use” cannabis market. Included in these rules was several new license types not contemplated by the MRTMA statute, one of which is the marihuana event organizer license, as well as its companion license, the temporary marihuana event license.

The purpose of these new licenses was to create a regulatory scheme where adults over the age of 21 could buy and consume marijuana at a public event much in the same way they already buy and drink alcohol. As someone who represents large event spaces and tons of Michigan cannabis companies, I immediately recognized the importance of this license for event organizers and event spaces.

Why an Event Space Should Apply for an Event Organizers License

I was talking with my client that owns several large event spaces about the marihuana event organizer license. They are usually happy when most of their concert goers are getting high, though they obviously prefer them to do it outside the theatre and indoor event areas. The reason? High people are a lot less destructive than drunk people when it comes to post-event cleanup and repairs, and also a lot less violent. You don’t really ever see two really high people get into a fight at a concert, but with drunk people it’s an all too common occurrence.

And let’s be frank—people smoke marijuana at concerts, regardless of whether the facility actually allows it and regardless of whether the event is held indoors or outside. This is a simple fact of life.  If concerts were to ban alcohol, you could pretty much guarantee that people would be smuggling in their own drinks or at least likely getting pretty liquored up before coming into the venue. Rather than fight this, most concerts and festivals have chosen to embrace alcohol. The rationale goes that it’s going to happen anyway, so it’s better to control it and make a little money off of it as well. For some venues, alcohol sales is the primary source of income, bigger than even ticket sales.

The rationale for allowing marijuana at public events is similar. It’s going to happen anyway, and you’d probably be better off having a bunch of stoned concert goers than drunk ones anyways. If you allow attendees to buy cannabis onsite and set aside a designated space for its consumption, you can at least control the use of cannabis at your facility. Looking at it from this perspective, it seems like common sense.

The other main rationale for allowing cannabis sales and consumption is that it makes money! Many concert and event spaces’ profits are derived from alcohol and beverage sales, and as noted above, this can be a double-edged sword due to the problems excessively drunk event goers can cause. Having a marihuana event license allows venues to make money by charging vendors —i.e. marijuana retailers and microbusinesses. who sell at their venue—for using the space. Thus, a marihuana event license is a win-win situation for many event venues—you have less trouble with event goers, and you make money from allowing the sale of cannabis at your venue.

Now let’s assume that I have convinced you that allowing marijuana to be sold and consumed at your event is the way to go. What does cannabis event organizer license allow you to do, and who is able to get one?

How to Get a “Marihuana Event Organizer” License

Michigan cannabis event organizers are subject to the same background check that other MRTMA applicants are subject to. Don’t fret, however. That marijuana possession charge you got a couple years ago will not disqualify you—the only disqualifying charge is selling controlled substances to minors. Also don’t fret about not having enough money to meet capitalization requirements since there are none under the MRTMA, and the license fee for an cannabis Event Organizer license is only $1,000.

How to Get Temporary Marijuana Event License

Once you get local approval, you can apply for the temporary marihuana event license. You can get the event license for a single day or several days if the event is multi-day, though you can’t get one for more than 7 days in a row.

Each event that you want to have on-site sale or consumption of marijuana will require a separate application to the Marijuana Regulatory Agency. You will also need to apply at least ninety days in advance to ensure MRA has enough time to review your event application. The application requires the following information:

While these requirements may seem like a lot, keep in mind that once a venue does this for one event, they will have most of the information compiled and ready for the next event, which will make this process progressively easier as time goes on.

A marihuana event license is perfect addition to many event spaces and festivals. It allows the event space to make more money, will likely lead to a less “rowdy” crowd at your event, and has the added benefit of regulating and controlling where marijuana is smoked or consumed within your event. The biggest hurdle to having a marijuana event will likely be getting municipal approval for your specific event location, but once that hurdle is overcome, you will be well on your way to making “high profits” (I couldn’t resist).

Will The U.S. House of Representatives End Marijuana Prohibition?

How to Start a Legal Cannabis Business in Michigan

What to Know About Recreational Marijuana in Michigan

Can a Municipality Discriminate Against Non-Residents for Cannabis Licensing?

Getting Genetics into Your Michigan Adult-Use Cultivation Facility