An Overview of the Proposed MMFLA Rules: Confirmations, Clarifications and Revelations

The Department of Licensing and Regulatory Affairs released a new set of draft rules to replace the Medical Marijuana Facilities Licensing Act (“MMFLA”) Emergency Rules. While in most cases the proposed rules are in line with the Emergency Rules, there were some substantial, and some subtle, differences between the two.

Below is a summary of the proposed rules broken into three categories. The first category—confirmations—reflects situations where the proposed rules are in line with the Emergency Rules or what LARA has been advising us over the past year. In other words, the old requirements or guidance, many of which were potentially subject to change—are officially confirmed as part of the proposed rules. 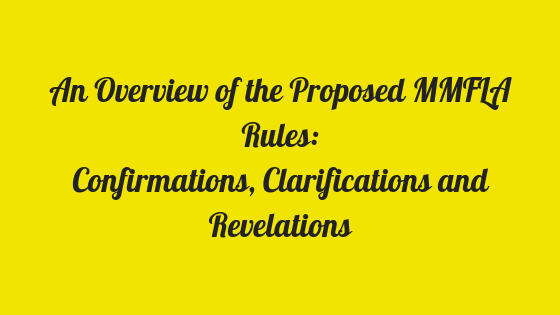 While the above lists are not exhaustive, they highlight key changes as well as similarities between the MMFLA Emergency Rules and LARA’s proposed rules released August 23, 2018. It is important to note that the proposed rules are not final—at least not yet. Under Michigan’s rule making process, the rules must first be subject to public comment before they can be finalized by LARA.