What if my MMFLA Commercial Marijuana Application is Denied?

It’s happening more often that you’d think – LARA and the Bureau of Medical Marihuana Regulation (BMMR) are denying Part 1 prequalification applications at pretty much every licensing board meeting. These reasons have varied from the failure to provide all requested material to issues with the applicant’s “character” and integrity. So what happens if your application has been denied for a Michigan medical marijuana business license? This article will discuss the MMFLA appeals process and what to do if you MMFLA commercial license application is denied by the Medical Marihuana Licensing Board.

LARA has provided some guidance on this topic in Emergency Rule 46, which governs the appeal process. As LARA is a public agency, any rejected applicant is entitled to an appeal before an Administrative Law Judge (ALJ) if they meet certain requirements. However, the appeals process for the denial of an MMFLA license is actually much more convoluted than a simple appeal to an ALJ.

First, the regulations require an applicant to request a public investigative hearing within 21 days of service of the notice. This requires the applicants to act quickly, as their window of opportunity is only 3 weeks from the date the rejection letter is mailed.

Prior to the public investigative hearing, an applicant should prepare all the evidence and testimony they need to show their eligibility and suitability for licensure. The agency or ALJ might send out subpoenas requesting additional documentation from you to support their case, which you would have to provide them with prior to the hearing. 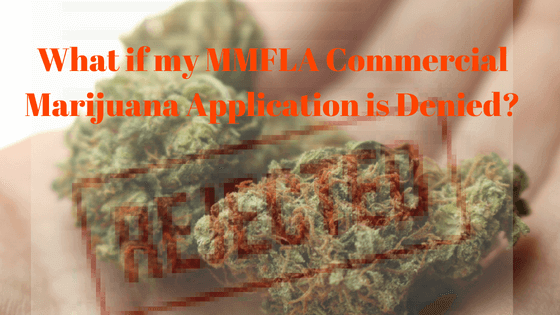 As it is a public hearing, not only will an ALJ and representatives from LARA be present, but also members of the general public. Much like a civil court trial, the applicant will have the opportunity to present their argument, question witnesses, cross-examine opposing witnesses, provide supporting exhibits, and answer questions from the ALJ. The ALJ will then be able to make a recommendation as to whether the Board’s decision should be affirmed, reversed, or modified.

It is important to note that the applicant needs to establish, by clear and convincing evidence, that it is eligible and suitable for licensure. This is a very high threshold for applicants, and should not be taken lightly. This appeal process is rigorous and will require a vast amount of time and work in order to prepare a winning strategy for your appeal. There will be a significant amount of time between when your application is denied by the Licensing Board and when you have the ability to go before an impartial decision maker in state court. This was likely by design. By making denied applicants go through a literal “run around”, these applicants will be much less likely to challenge the Licensing Board’s decisions in state court.

There is one simple alternative to this process…reapply. There is nothing stopping you from reapplying using the exact same application, though this would not be recommended. Depending on the issues that tripped up your original application, a few changes or small tweaks may be all that is needed to turn your denial into an approval. As an example, there has been applications denied for the failure to provide adequate explanations to LARA deficiency letter issues. A good lawyer may be able to craft an explanation that satisfies the Licensing Board’s concerns. In addition, it is possible that the application was denied because of background issues of one single partner. That partner could then be bought out and the other partners reapply without the issues related to their previous partner that weighed down their previous application.

In sum, if you have recently been denied in the Part 1 application process, we recommend contacting a Michigan medical marijuana business attorney to discuss your options. It is possible that an appeal, though time consuming and expensive may be your best option. It is also possible that you would be better off simply reapplying with counsel familiar with the process and knowledgeable about how to fix the issues that caused your original application to be denied.