MMFLA Licensing is Getting Tougher – A Recap of the May 31, 2018 BMMR Meeting

In attendance were all 5 Board members, as well as LARA Director Brisbo and a LARA staff attorney.

The Board approved 12 out of 19 Michigan Medical Marihuana Facility Licensing applications in this session but did not state which type of MMFLA license each applicant was seeking. Even with 63% of the applications receiving prequalification approval, there was one recurring theme throughout the public meeting – the licensing process evaluations appear to be getting tougher.

There were multiple applications denied for the failure to disclose prior criminal history. While this is certainly not a new issue, there was one application that was denied for failure to disclose 2 arrests from 1981. The staff attorney from LARA did clarify that the statute allows the Board to deny prequalification if the applicant “knowingly submitted false information” on their application. Therefore, the Board must determine if there was intent to deceive by failing to provide information. If the Board determines that an individual did intentionally leave certain information off of the application, the rejected applicant may appeal the decision before an Administrative Law Judge for reconsideration. 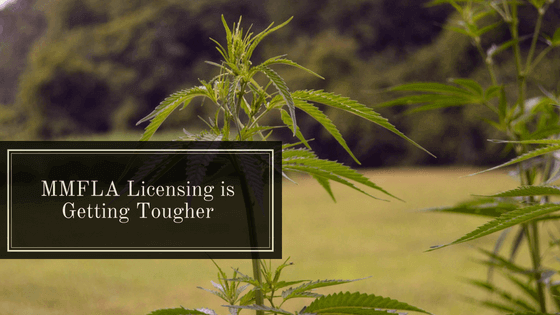 Integrity, Moral Character and Reputation of the Applicant

Another recurring issue that the Board discussed in the meeting was the integrity, moral character and reputation of the applicants. This was the first meeting where “character” issues played a significant role in the Licensing Board’s review of MMFLA applicants. For example, one applicant had two members – a 70% owner/Michigan resident and a 30% owner/New York resident. The application was denied prequalification because the Michigan-based member was dropped from the application the day after he was charged with possession of marijuana, and the New York member was proceeding alone on the application. The members did complete all necessary documents to show that the Michigan resident would not be involved in the business. The Board determined that as the New York member did not reside in Michigan, he would likely rely on the Michigan individual to assist in running the business despite their assertions to the contrary.

One of the more difficult applications before the Board was an applicant who had been convicted of operating a 4,000 plant grow in Minnesota and served 3 years in federal prison. While the applicant did properly disclose this conviction, the Board noted that he continued to operate in the illegal medical marijuana business after his release from prison. The Board did state that upon inspection, he was growing 72 plants pursuant to the MMMA. However, the applicant did say he was making money from this caregiving business, which Mr. Bailey stated is not allowed by statute (though this was somewhat contradicted by the LARA staff attorney). Further, the Board did mention that as this industry is “ripe for abuse”, they need to carefully consider whether applicants are likely to violate the regulations set forth in the MMFLA. Given all of these factors, the Board denied the prequalification 3-2.

Another application was denied based on the applicant’s lack of explanation for large deposits in their financial records. The Board determined that the responses received from the applicant were inadequate – for example, a $2,800.00 deposit was simply explained as being “cash or check” and did not fully explain where the money came from. The Board decided that the failure to provide an adequate explanation speaks to integrity and honesty of the explanation.

With so many medical marijuana facility prequalification applications pending with LARA, and the BMMR’s hard line stance on failure to disclose and their analysis of the over in all integrity of the applications, it is clear that the marijuana business licensing process in Michigan is getting much harder. It is imperative that your MMFLA application be accurate, comprehensive and clear to the BMMR upon their review. If you have questions or concerns regarding the MMFLA licensing process for your Michigan medical marijuana business, we recommend you contact a Michigan marijuana business attorney today to discuss the specifics of your situation and how to ensure your application moves smoothly through this difficult process.